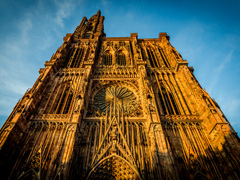 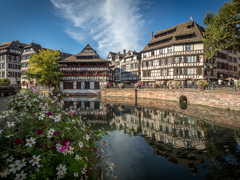 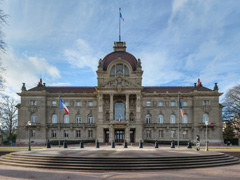 “The Timeless Light”, an original performance and a journey back through time…

At nightfall, Notre-Dame cathedral‘s lace-like stonework is brought to life with a myriad of colours as a tribute to the colourful decor of yesteryear. History comes alive before and the cathedral becomes a living canvas, superbly transfigured. A must-see event!

This major summer show with a focus on sound, light and images to be held from 2 July to 18 September 2016 in Place du Château.

The show in Strasbourg, which has been given the title “La lumière intemporelle” (The Timeless Light) will be based on different pictures expressed through the use of video, light, sound and candles, describing the journey of light. In all, some 690 artificial candles (known as “boogies”) will be installed on the southern façade, the Lycée Fustel and the building of the Post Office.

The light show, which will last approximately a quarter of an hour, can be seen by 10,000 to 12,000 people simultaneously in Place du Château. Four to five projections will take place each evening in July and August and two in September.

At the heart of Strasbourg, classified UNESCO world heritage, discover the Petite France.

This is the most picturesque district of old Strasbourg. Fishermen, millers and tanners once lived and worked in this part of town where the streets have been built level with the waterways.

The magnificent half-timbered houses date from the 16th and 17th centuries. Their sloping roofs open out onto lofts where hides were once dried.

Continuing on from the Petite France area we come to the Covered Bridges. These have kept their name despite the fact that they lost their roofs back on the 18th century. They are overlooked by four towers dating from the 14th century, which are the remains of the former ramparts that once guaranteed the independence of the former Strasbourg Republic.

Immediately after the absorption of Strasbourg by France in 1681, a new ring of fortifications was built here by Vauban.

Will Neustadt soon be ranked by UNESCO ?

In 1871 Strasbourg became capital of the Reichsland of Alsace-Lorraine, and the city would undergo considerable change.

Strasbourg “Great Island” along with “German Quarter” have applied to be ranked as part of World Heritage List of UNESCO, due to exceptional character of this side of the town, built at the end of the XIXth century. What do you actually know about this quarter ?

In 1871 Strasbourg became capital of the Reichsland of Alsace-Lorraine, and the city would undergo considerable change over the next 5 decades or so.

Until then, Strasbourg was growing inside of its historical limits, in the middle of the protecting buckle of Ill River. Starting years 1880, under German authorities, a vast construction site was opened to triple city area.

Building of Neustadt fulfilled several goals. First, to show everybody the change in political power : Imperial place, named to day Republic place, was the pivot of this urban turnaround. It grouped all official buildings, dominated by the “Palais du Rhin” which was the residence of the emperor when in Strasbourg.

But, it was also necessary to accommodate newcomers. Annexation brought to Strasbourg an important German immigration. In 45 years, population of the town more than doubled, from 80 000 in 1870 to 180 000 in 1915.

As far as style is concerned, eclectism was the rule, which is part of the charming look of the quarter. An “art deco” building would neighbour with an elegant “rococo” style villa. A little further, neo-gothic arrows of Saint Paul Church seem like flying in the sky. Quite a totally different architecture.

Allow your stay in Alsace to be unforgettable, Ermitage du Rebberg welcomes you.

This site uses Akismet to reduce spam. Learn how your comment data is processed.

Ermitage du Rebberg
Our website uses cookie to help provide you with the best experience we can. If you continue to use the site without changing your settings, we'll assume you agree to this.Ok