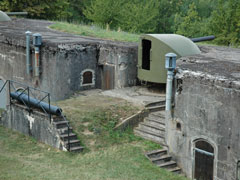 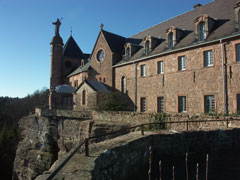 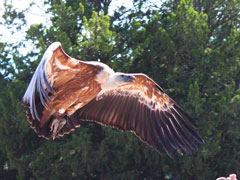 “Built from 1893 to 1916, the Mutzig fortress was named “”Feste Kaiser Wilhelm II”” in 1895. It was the first German fortification to be made of concrete, entirely armored, ventilated and lit by electrical power. This prototype was an experimentation preliminary to the construction of the dispersed fortifications: ouvrages scattered on the terrain, dug underground and connected by underground galleries. It was the most powerful and largest fortification in the German Empire in 1914: it spanned 254 ha (636 acres), covered 40,000 square meters underground, with 22 artillery turrets& Its exceptional preservation and the excellent rehabilitation work and outfitting as a museum have contributed to make it a memorial and one of the best sites in Alsace for research into military architecture, technology and history. The visit is varied: infantry casemates, batteries of armored artillery, armored observation turrets, machine gun pillboxes, firing trenches& Numerous authentic objects and pieces of equipment can still be seen: the generating plant, the bakery, the kitchens, the wells, the men’s sleeping quarters with their bunks, the surgery, the hospital, the toilets& Every year, an exhibition is organized on a historical or artistic topic: collections of French and German military headgear and paintings of the fortified belt around Strasbourg were the themes for 2002. Wear warm clothes. “

” Looking out over the plain of Alsace, Mont Sainte Odile was an influential convent for many centuries. Today, it has been converted into a hotel and this sacred place once dedicated to Odile, the patron saint of Alsace, still attracts many pilgrims. However, Mont Sainte Odile also welcomes a number of non-believers who simply wish to profit from the natural woodlands surrounding the area. Hikers can stride along the sign-posted paths and discover, in particular, the pagans’ wall built in around 1000 BC whose origins have given rise to a number of mystic speculations !”

“Eagle Mountain in Kintzheim offers a fascinating, impressive spectacle: the greatest birds of prey in the world freely flying against a backdrop of the ruins of Kintzheim Castle. A unique opportunity to observe birds close to that you can’t get near in nature. In this Mediaeval setting, the most beautiful birds of prey in the world fly just a few inches from the public. A truly marvellous outing for young and old alike! On the agenda: a captivating show with the acrobatics of black kites, the overhead flights of buzzards and vultures and an encounter with the Andean Condor. Great fun! And it’s just 20 minutes on foot from Monkey Mountain, the other great attraction in Kintzheim.”

Allow your stay in Alsace to be unforgettable, Ermitage du Rebberg welcomes you.

This site uses Akismet to reduce spam. Learn how your comment data is processed.

Ermitage du Rebberg
Our website uses cookie to help provide you with the best experience we can. If you continue to use the site without changing your settings, we'll assume you agree to this.Ok